by Shannon Rooney, For Philly.com 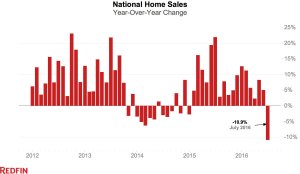 o Redfin’s latest year-over-year survey, there is good news in the Philadelphia real estate market, and there is news that seems not so good that they characterize as not great but no reason to panic. Really, check out that URL!

While home sale prices in the region were up a hair at 0.4 percent compared to last July, the actual number of homes sold was down 28 percent, the real estate firm found. Economists there say this is more of a market correction, given that last July sales were up an astronomical 37.6 percent. Not too bad.

But then, Redfin also found that the number of homes on the market – otherwise known as inventory – have been down for the last 12 months consecutively. Meaning sales overall are down by month and by year. It’s not just a local phenomenon, either. July showed the biggest sales decline since April 2011.

Not to fear, Redfin says. There were just a lot of weekends in July. Meaning fewer business days (usually Fridays) left on which to settle.

Pete Ziemkiewicz, Redfin director of analytics, said in a statement, “Every month is a snowflake with a different number of Fridays and Saturdays and Wednesdays. All else equal, we’d expect the number of homes sold throughout the U.S. to be 7.5 percent lower in July 2016 than it was in July 2015, simply because of the way the days laid out on the calendar.”

We’ll see how it goes in August.